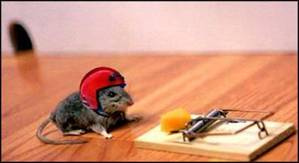 Whether you know it or not, you take risks every single day. To some we have become acclimatized, such as driving a car on an icy road or crossing a street against the light.

Some risks we take, we don’t really understand. They seem smaller or larger than they really are. Most of us worry about being in a plane crash and don’t worry about dying from diabetics, a stroke, or a car accident. Yet study after study tells us that we are much more likely to die from any one of those three than a plane crash. In his article How Risky is Flying, David Ropeik writes, “The annual risk of being killed in a plane crash for the average American is about 1 in 11 million. On that basis, the risk looks pretty small. Compare that, for example, to the annual risk of being killed in a motor vehicle crash for the average American, which is about 1 in 5,000.”

Even when we don’t take a risk, we are taking a risk. Particularly in world that is changing as quickly as ours is currently. Just because what you did yesterday was successful, there is no guarantee that it will be successful tomorrow. Standing pat is a risk. Standing pat looks like safety and yet safety is an illusion. The world isn’t predictable enough to be completely safe.

As a result, I’m a believer in taking risks. Some of my risks are small. They are taken to test the waters or to learn something new. Often I will take larger risks. These are taken with deliberation or calculation. And sometimes, when the danger of a harmful outcome is really, really low, I will take foolish risks for fun and for the spice they add to my life. Riding roller coasters or sky diving anyone?

Because I believe in taking risks, I was delighted to see that Mitch Ditkoff, writing on Huff Post put together a list of 50 Awesome Quotes on Risk. Here are a dozen of my favorites from his list:

“Take calculated risks. That is quite different from being rash.” — General George Patton

“Only those who will risk going too far can possibly find out how far it is possible to go.” — T.S. Eliot

“Don’t be afraid to take a big step. You can’t cross a chasm in two small jumps.” — David Lloyd George

“Do one thing every day that scares you.” — Eleanor Roosevelt

“I can accept failure. Everybody fails at something. But I can’t accept not trying. Fear is an illusion.” — Michael Jordan

“Security is mostly a superstition. Life is either a daring adventure or nothing.” — Helen Keller

“Twenty years from now you will be more disappointed by the things you didn’t do than by the ones you did. So throw off the bowlines, sail away from the safe harbor, catch the trade winds in your sails. Explore. Dream. Discover.” — Mark Twain

“Pearls don’t lie on the seashore. If you want one, you must dive for it.” — Chinese proverb

“Yes, risk-taking is inherently failure-prone. Otherwise, it would be called ‘sure-thing-taking.'” — Jim McMahon

“What great thing would you attempt if you knew you could not fail?” — Robert Schuller