With the December 18th release of the new Star Wars movie, Star Wars: The Force Awakens, you may want to decorate your home with Star Wars related Christmas decorations. If so, then Anthony Herrera has got you covered. 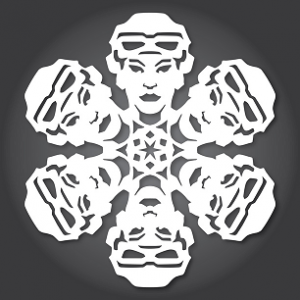 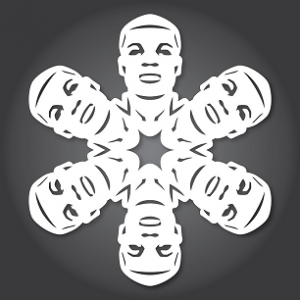 Mr. Herrera is a graphic designer and a self confessed geek. Combining these two has led him to create Star Wars snowflakes. Not only does he design these amazing geeky snowflakes, he also provides the plans for free so that you can make them for your own Star Wars Christmas special. However, “you may NOT use any of these designs for resale purposes, including producing other types of products using these designs.”

Here is his website for the Star Wars snowflakes, where you’ll find the designs for seven snowflakes including Rey, BB-8, and Finn, as you see above. Mr. Herrera has also created designs for a First Order Stormtrooper and Kylo Ren Lightsaber.

This isn’t the first time that Mr. Herrera has created Star Wars snowflakes. He has been designing these since at least 2011, and each year he unveils a new collection. Scroll down to the bottom of his page for links to the previous sets, or just follow these links:

2012 Collection, twenty-four snowflakes including Princess Leia, Chewbacca, and an Ewok

2014 Collection, seven snowflakes including Greedo, Jabba The Hutt, and a Wampa

Recently, Mr. Herrera has been expanding beyond doing only Star Wars snowflakes. Now he has a collection for Frozen and Guardians of the Galaxy.

This entry was posted in Uncategorized. Bookmark the permalink.