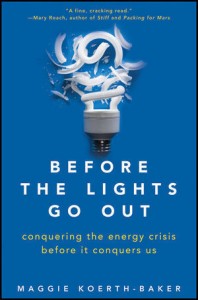 Rather than just seeking our support on an issue or initiative, some organizations also want us to adopt their point of view. Not surprisingly, a strategy like this can create tensions and be divisive, fueling an all or nothing point of view. “If you’re not with us, you must be against us!”

In her book Before the Lights Go Out: Conquering the Energy Crisis Before It Conquers Us

, Maggie Koerth-Baker. tells of an group that realized that individuals could support organizational goals without agreeing with the organizations’ mission.

The Climate and Energy Project (CEP) in Kansas helped to defeat a major electrical generation project (the Sunflower project) that would have seen the building of three new generators at an existing coal plant in the western Kansas town of Holcomb. This project was defeated, in part, by an argument CEP put forward regarding the “long-term, slowly creeping health impact of carbon dioxide emissions.”

Following the defeat of the Sunflower project, CEP wanted to bring the various sides together to produce real change in how energy was created and used. Through the use of focus groups, CEP and their lead environmentalist, Ellen Horn, “got a bunch of Kansans together in a room, lob some ideas at them, and watch how they responded.”

At one of the focus group, Ms. Horn watched from the other side of a two-way mirror, as a man in the group said, “‘Climate change is a lie.’ The man leaned back in his chair and folded his arms over his chest. ‘Climate change is a lie,’ he said again. ‘It’s just something make up by environmentalists to scare us.'” Ms. Horn had heard this comment many times before. However, in this case, even though the man didn’t believe in climate change, he did drive a “hybrid car and [had] changed all his light bulbs out to CFLs.”

This moment changed Ms. Horn’s outlook on the world. “Like many people who might describe themselves as ‘green,’ Horn thought of climate change as an idea you had to accept before you’d be willing to care about energy change. Before the focus groups, she saw climate and energy as a couple of nested boxes. Open the alternative energy box, and you’d find a box full of climate change fears inside. She was wrong.”

“We came away with multiple examples where people who didn’t believe in climate change were taking action anyway for other reasons,’ Horn said. A lot of it was energy security and also conservation, which is just an ethic that we have in the Midwest. Prudence came up a lot, with people saying, ‘Well, even if we aren’t sure, maybe we should take action just in case.'”

“That lesson – that you don’t have to care about climate change to care about energy was enough to alter the way the Climate and Energy Project did business. Instead of kicking off their campaign by trying to lead a bunch of very stubborn horses to the lake, they just skipped right ahead to the part where everybody gets a glass of water.”

This story illustrates that there may be support for organizational goals, even when there isn’t support for the underlying reasons why the organization wants to pursue these goals. Perhaps, it’s time for all of us to focus on where there is agreement toward solving problems, rather than simply trying to push our beliefs on everyone else.