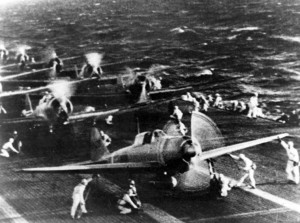 The Japanese also attacked other American military installations on Oahu including the Hawaiian Air Force, stationed at the Hickam, Wheeler and Bellows Fields. These facilities were struck to eliminate air opposition and to prevent the American Air Force from counter-attacking the Japanese aircraft carriers. Prior to this unprovoked attack, the two nations were not officially at war with each other.

The attack was intended to cripple United States Pacific Fleet, to keep it from interfering with the Japanese advance into Southeast Asia (particularly Malaya and the Dutch East Indies). Japan sought to capture these territories for the oil, rubber and other natural resources being produced there.

Using six aircraft carriers, the Japanese launched over 350 aircraft (bombers, torpedo planes and fighters) at Pearl Harbor and other targets on Oahu. They succeeded in damaging all eight United States Navy battleships anchored at Pearl Harbor. One battleship, the Arizona, was completely destroyed and sunk with a loss of 1,177 lives. In addition, the attack damaged or sank three American cruisers, three destroyers, an anti-aircraft training ship, and one mine layer.

Over 2,400 American were killed in the attack with almost 1,300 wounded. The losses to the Japanese were considered light, with 65 killed or wounded, 29 aircraft and five midget submarines destroyed.

While this Japanese strike did cripple the United States Navy in the Pacific for the better part of a year, the Americans were fortunate that all three American aircraft carriers (the Enterprise, Lexington, and Saratoga) were out at sea on December 7th. It appears that the Japanese knew the carriers were not at Pearl Harbor and launched the assault anyway, believing they would be victorious in a brief Pacific war.

While the two countries were not officially at war at the time, tensions between the nations had been increasing throughout 1941. According to a Gallup survey released just before the Pearl Harbor attack, a small majority of Americans expected that war with Japan was imminent.

This surprise attack both shocked and galvanized the American public. At 12:30 PM on December 8th, United States President Franklin D. Roosevelt delivered a speech to a Joint Session of Congress that has become known as the “Day of Infamy Speech.” Just one hour after President Roosevelt concluded his speech, the United States Congress formally declared war against Japan. The United States entered World War II.

In the years since Pearl Harbor, the prevailing view has been that government of Japan and the leaders of the Japanese Imperial Navy (including Admiral Yamamoto) had intended to declare war prior to the attack. Howard French, writing in the New York Times (on December 9th, 1999), reported Japanese Foreign Ministry documents contradicted this view. Quoting Mr. French’s article:

The picture that emerges from the papers is one of a breathtakingly cunning deceit by Tokyo aimed at avoiding any hint to the Roosevelt administration of Japan’s hostile intentions.

The newly discovered documents include an earlier draft of the Final Memorandum, dated Dec. 3, in which the Japanese Foreign Ministry, mindful of the country’s obligation under the Hague Convention to declare war before attacking, proposed stating that ‘we are forced to terminate negotiations.’

Takeo Iguchi, a professor of law and international relations at the International Christian University in Tokyo, who discovered the papers in the Foreign Ministry archives, said the draft memorandum, together with the wartime diary of Japan’s general staff, pointed to a vigorous debate inside the government over how, indeed whether, to notify Washington of Japan’s intention to break off negotiations and start a war.

‘The diary shows that the army and navy did not want to give any proper declaration of war, or indeed prior notice even of the termination of negotiations,’ said Mr. Iguchi. ‘And they clearly prevailed.’ Mr. Iguchi said the general staff, together with a pliant Foreign Ministry, had controlled not only the content of the message to Washington, but also its timing.

Regardless of whether it was intended as a sneak attack, Japan’s actions at Pearl Harbor had far reaching repercussions. By entering World War II, America greatly increased the men and materiel, research and development, and production capabilities available to the Allies. The attack also led to the atomic age when atom bombs was used against Japanese targets.

Here is President Franklin D. Roosevelt delivering his “Presidential Address to Congress of December 8, 1941,” which has become known as the “Day of Infamy Speech.”