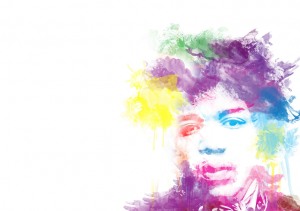 Seventy years ago today, the man who Rolling Stone magazine hails as the greatest guitarist ever was born in Seattle, Washington.

At birth his name was Johnny Allen Hendrix. In 1945 his father Al Hendrix, returning from fighting in Europe during World War II, rechristen him James Marshall Hendrix. However, the world would come to know this amazing musician as Jimi Hendrix.

Learning to play the acoustic guitar as a 13 year-old, Jimi would develop his skills by listening to records by blues guitarists Muddy Waters and B.B. King and rockers such as Chuck Berry and Eddie Cochran.

In 1961, Hendrix enlisted in the US Army and was assigned to the 101st Airborne Division. After breaking his ankle during his 26th parachute jump, he was honorably discharged in 1962.

Jimi spent a short period following his discharge working as a sideman on the rhythm-and-blues circuit, before packing up and moving to New York City, where he discovered the Greenwich Village music scene. During his time in New York, he worked as a studio musician and sideman for many R & B artists including Sam Cooke, B.B. King, Jackie Wilson, Ike and Tina Turner, and Wilson Pickett. Hendrix also played on several recordings by Little Richard and toured as part of Little Richard’s band in 1964 and 1965. Forming his own band in 1965, Jimmy James and the Blue Flames, Hendrix played Greenwich Village coffeehouses.

Hendrix’s career didn’t really gain traction until Chas Chandler, bassist with The Animals at the time, brought him to London in September 1966 and signed him to a management and production contract. It was Chandler who suggested that Hendrix change the spelling of his first name to ‘Jimi’ from the more pedestrian ‘Jimmy’ and helped him to form a new band, the Jimi Hendrix Experience.

The first single by the Jimi Hendrix Experience was “Hey Joe.” Reaching #6 on the U. K. chart in early 1967, “Hey Joe” was quickly followed by “Purple Haze.” The band’s debut album “Are You Experienced” would reach double-platinum in the U. K. While he and his band were the rage of London, he was still largely unknown in North America until, at Paul McCartney’s insistence, the Jimi Hendrix Experience played the Monterey Pop Festival, in June of ’67.

In 1968, Hendrix would release two albums (“Axis: Bold as Love,” and “Electric Ladyland”). Both were major hits, with “Electric Ladyland” hitting the top of the Billboard album chart in November ’68, elevating him to superstar status.

By early 1969, the Jimi Hendrix Experience was breaking up. Offered the opportunity to perform at the Woodstock music festival, Hendrix formed a group called the Gypsies, Sun and Rainbows. They were closing act of the festival. Due to delays and logistical problems, they were not able to perform until the morning of Monday, August 18th. By this time, the audience had dwindled to 25,000 from the original 400,000. Still, Hendrix showed his virtuosity with his incredible version of “The Star-Spangled Banner” that went on to became an anthem of the counterculture. This performance was filmed and included in the documentary “Woodstock” that was released in 1970.

During the evening of September 17th, 1970, Jimi Hendrix had apparent an allergic reaction to prescription sleeping pills. He collapsed and was taken to a hospital where he was pronounced dead of asphyxia on September 18th, 1970. He was 27 years old.

Rolling Stone describes Jimi Hendrix as “A left-hander who took a right-handed Fender Stratocaster and played it upside down, pioneer[ing] the use of the instrument as an electronic sound source. Players before Hendrix had experimented with feedback and distortion, but he turned those effects and others into a controlled, fluid vocabulary every bit as personal as the blues with which he began.”

For a taste of his talent, here is his first hit single, “Hey Joe.”