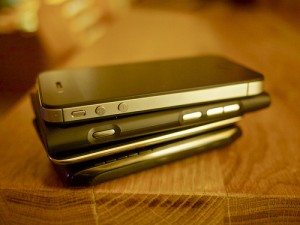 Our always connected, social media lifestyle is full of odd quirks. One of them occurs when we’re out dinning with family or friends. Even though we are with people, being social, there’s the itch to check our mobile devices.

It’s fun to watch groups at restaurants hunched over phones. Their thumbs busy sharing and responding, all the while ignoring their real world table mates. Watching maybe fun, being a part of it, isn’t.

To combat this lack of personal interaction, Stephie in Ventura, California created a game. Originally called Don’t Be A Di*k During Meals With Friends, she first posted about it Tumblr. Now it’s more often called The Phone Stack.

The rules are very simple. Once everyone at the table has ordered, each communication devices needs to be turned over. For a more dramatic effect, they can be stacked on top of each other in the center of the table. Plus, it’s harder to sneak a look at a phone when it’s buried in a pile.

When a phone chirps or buzzes, what will prevent someone from reaching for their phone? Simple, the first person to grab their phone has to pay the bill for the table!

The Phone Stack has been called a “brilliant piece of social engineering,” and I agree. Finally, there is an incentive to put down that phone.

Is this game inspired or just stupid? Would you, or have you, tried it in your life? Please share your thoughts by adding a comment.